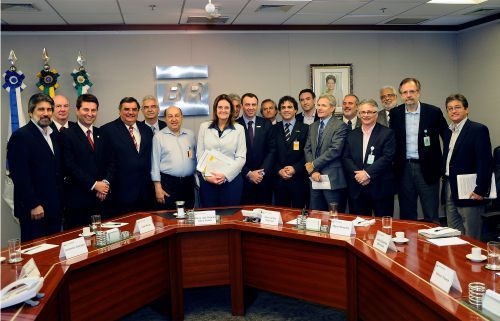 together with other entities of the sector, last afternoon (01/16). She said that she will verify the issues of the government on the future of biofuel in the country at the Civil House. Representative Jerônimo Goërgen and senator Valdir Raupp, president and vice-president of the Front, respectively, reported to Graça Foster about the expectation the sector has with relation to the uncertainty on the Regulatory Mark so that it provides more legal and regulatory security to guarantee new investments on the production of biofuel.

According to the parliamentary, after several technical and political meetings, there is not a clear sign by the government on when the proposal of the new legislation would be sent to the National Congress, nor whether or not it will be sent. The chairwoman of Petrobras asserted that she cannot speak on the government’s behalf, and that she does not make part of the decision group on the national energetic politics, but she has responsibility for the National Plan of Production and Use of Biodiesel created in 2005 by the federal government.

She also emphasized the important role the subsidiary of Petrobras, producer of biodiesel, Petrobras Biofuels, has in the organogram of Petrobras complex. The chairman of subsidiary Miguel Rosseto participated in the meeting. The company hit successive production records in the last few months last year. The chairman of APROBIO and chief executive officer of BSBIOS, Erasmo Battistella, delivered a letter of the entity to the chairwoman of Petrobras, reporting this scenario, in which the industry has waited for almost two years for the post of the new legislation to the National Congress. In the document, the Association asks for the support of Graça Foster as biodiesel producer.

According to members of the inter-ministerial technical committee, which was formed to study the issue since May 2012, the proposal draft is ready to expand the biodiesel market in the country.

Battistella handed to Graça Foster study "Socio-economic Impacts of Biodiesel Production in Brazil" as well, which was done by the Foundation Institute of Economic Researches (Fipe/USP) required by APROBIO. The study shows that the inflation provoked by the addition of biodiesel in mineral diesel, which today produces 5% per liter, was 0.0435 percentages, from 2008 to 2011, when it is compared to the national diesel, and 0.0420% when it was compared with the imported oil products.